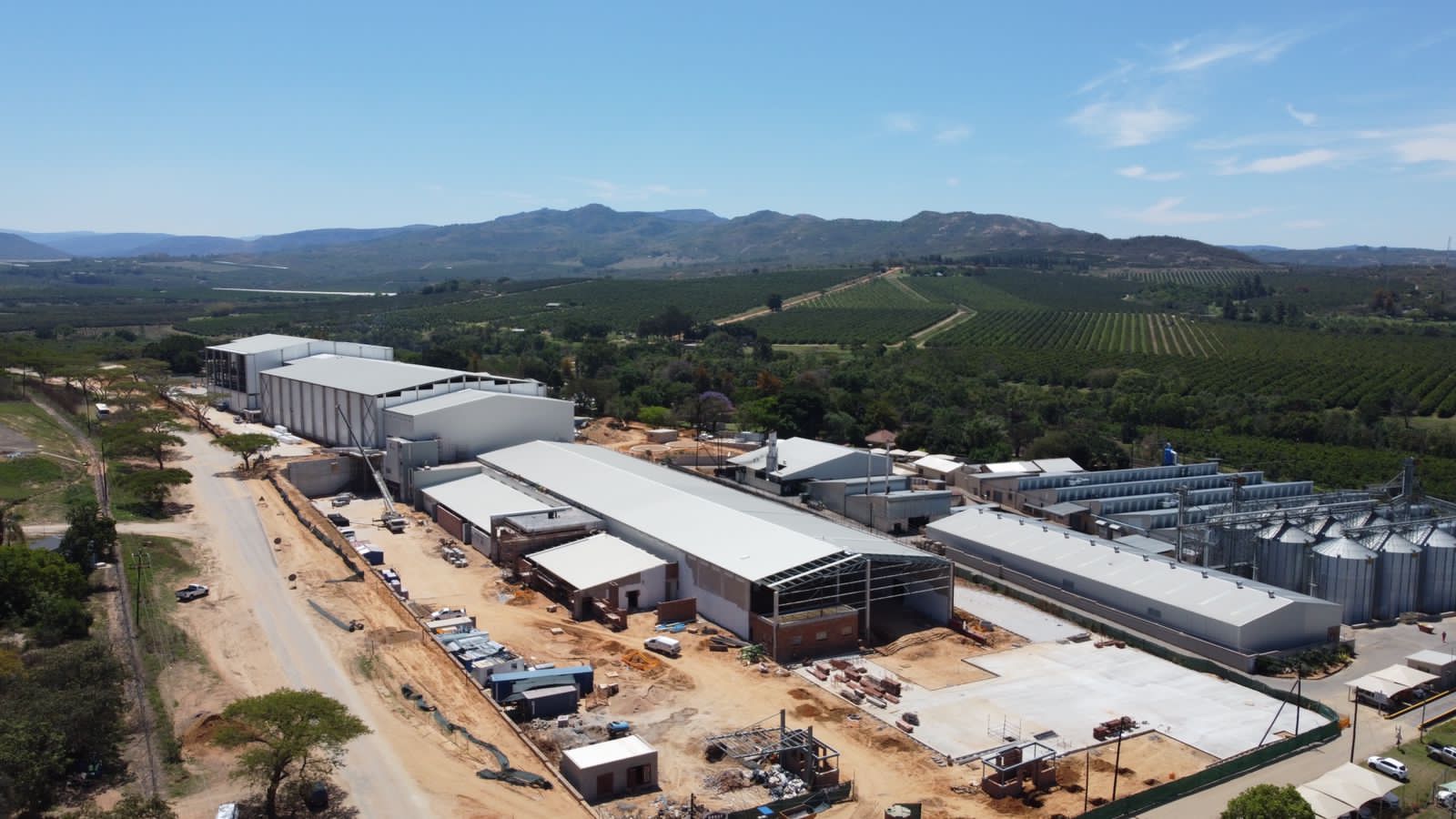 When a group of South African macadamia farmers decided 20 years ago to collaborate in processing and marketing their crops themselves, they initiated a strategy that would prove hugely successful. Today this ambitious cooperative business, Golden Macadamias, is the global leader in one of the nut industry's fastest-expanding sectors.

Golden Macadamias' success has been achieved by meeting the stringent quality requirements of export markets to tap into the booming international demand for macadamias. Attaining the highest product quality with large production volumes has been made possible by investing in the best available technologies. The most recent example of this is Golden Macadamias' acquisition of the new TOMRA 5C premium optical sorting machine, explicitly developed for nut and dried fruit applications. When this machine is combined with TOMRA's unique Biometric Signature Identification (BSI) scanning technology, it can detect and eject product defects that no other technology can see.

Perfect conditions for a world-leader

With the newly developed orchards, the South African crop volume grew from 9,036 metric ton (Mt) Dry-Nut-in-Shell (DNIS) in 2001 to an estimate of 57,834 Mt DNIS in 2021 (SAMAC). This growth of 540% over the past 20 years was necessary for the macadamia industry to stay relevant in the international market. The South African macadamia industry contributes roughly 20 - 25% of the world's macadamias, expressed as NIS volume (INC). South Africa is the largest contributor, with other significant contributors like Australia, Kenya, and China.

Macadamias are still seen as a young industry and comprise about 1 - 2% of the total world tree nut basket, with Almonds, Walnuts, Pistachios, Cashews and Hazelnuts contributing 95%. 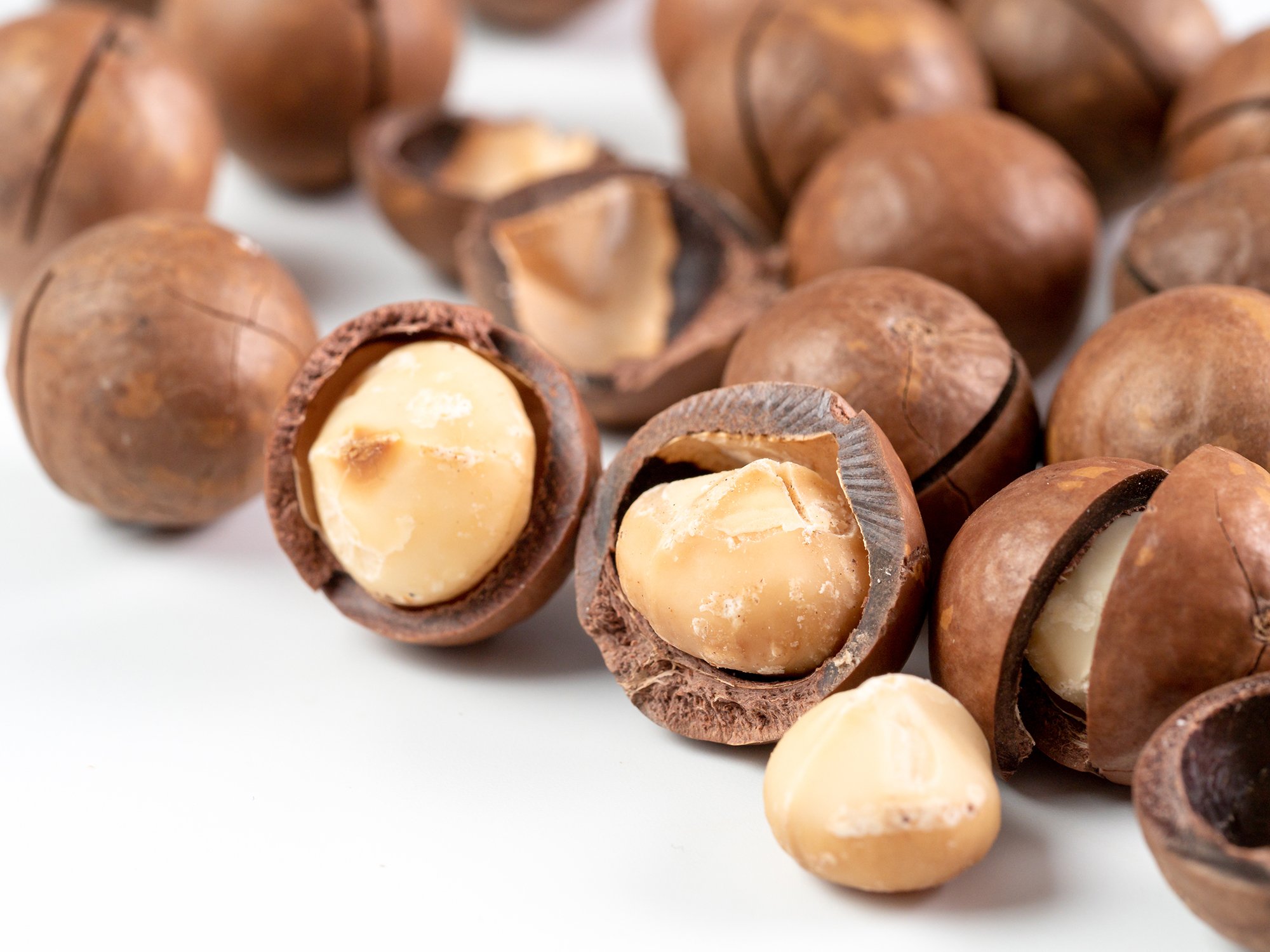 Golden Macadamias' 21,000 square-foot production facility is located in the northeast of the country, 200 miles east of Johannesburg, in a small hamlet just outside the city of Mbombela. This region is enriched by fertile soils and a subtropical climate, perfect for growing citrus and tropical fruits and sugarcane. This part of the world is also blessed with cool, dry winters, much better for preserving nut quality than more tropical regions where harvesting has to be done in warm and wet conditions.

The Golden Macadamia expansion project broke ground on 25th August 2020 after several delays caused by the COVID-19 lockdown. However, the project team has not let these hard times come in the way of progress, and their initial ambitious target of building the factory in 15 months is still a reality. The goal of the factory is to be operational in the 2022 season.

To put the magnitude of the new project into perspective, the earthworks consisted of moving and re-engineering 66,000 m3 of soil, the equivalent of filling 27 Olympic-sized swimming pools. The building has used nearly 800 tonnes of reinforced structural steel, equating to 500 km of steel bars. The project will pour about 12,300 m3 of concrete and lay 1.7 million bricks that would stretch from Nelspruit to Johannesburg if placed side by side.

Norman Smith, Area Sales Manager Africa, TOMRA Food, said: "Today 98% of the macadamia crop is exported. Approximately 55% of South Africa's macadamias are sold to the kernel market, mostly for export to the USA, Europe, and Asia. The other 45% goes to the in-shell market, some for sale domestically but mostly for export to China, where consumers prefer to crack the shells themselves. It is the kernel market which demands the greatest product quality." 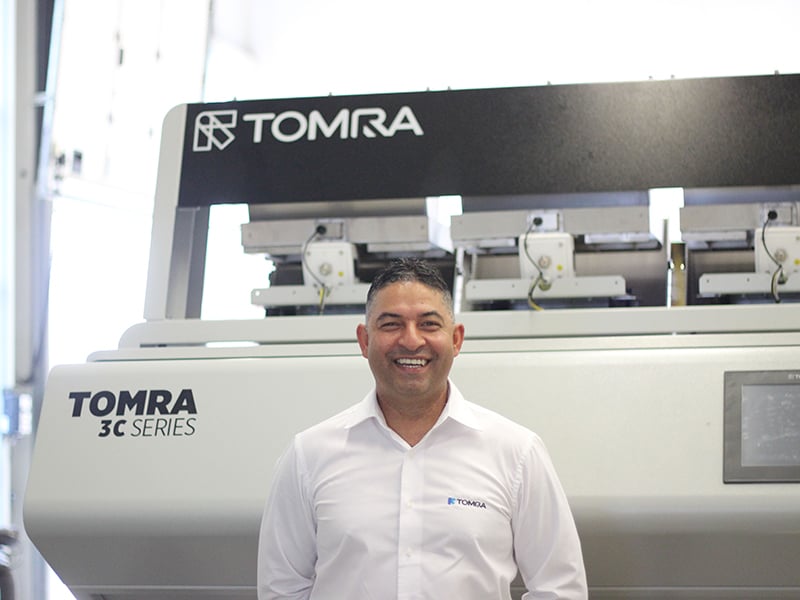 A mix of manual and automated sorting

Macadamia nuts are harvested after they have fallen naturally to the ground. The first task is to remove the green outer husks, then the nuts in their shells are sorted to remove foreign materials and defective products. After this, the nuts are graded by size. Because two-thirds of each nut comprises shell, processors have to deal with an extremely high defect level after cracking the nuts. Significant quantities of shell must be moved removed to clean up the kernel.

Some macadamia sorting is still done the traditional way, by hand. In addition to grading being done manually, nuts are put into a water bath early in the production process, where only the unwanted immature and underdeveloped nuts float to the surface and can be manually removed. But human sorters are unavoidably subjective, imperfect, and more vulnerable to error when tired or bored. Manual sorting can also diminish product quality because handling kernels makes them oilier.

To minimize these drawbacks, Golden Macadamias complements the sorting tasks that have to be done manually with sorting wherever possible by machines. Unlike human beings, automated sorters can assess nuts objectively, accurately, consistently, and at remarkable speed for hour after hour without any deterioration in efficiency. What's more, mechanical sorters can detect and eject a vast range of in-shell defects invisible to the human eye. Product quality is enhanced through these automated capabilities, throughput is high, food waste minimized, and yield improved.

To take advantage of these capabilities, Golden Macadamias employs TOMRA's BSI technology after the nuts are cracked and before they are manually graded.

Golden Macadamias controls every aspect of production and insists on world-class standards from all of its shareholder farmers. Due to the results shown by the Nimbus BSI+, the business decided to continue developing its partnership with TOMRA as part of its expansion project in South Africa by acquiring 10 TOMRA 3C machines and an additional TOMRA 5C with BSI+ technology. 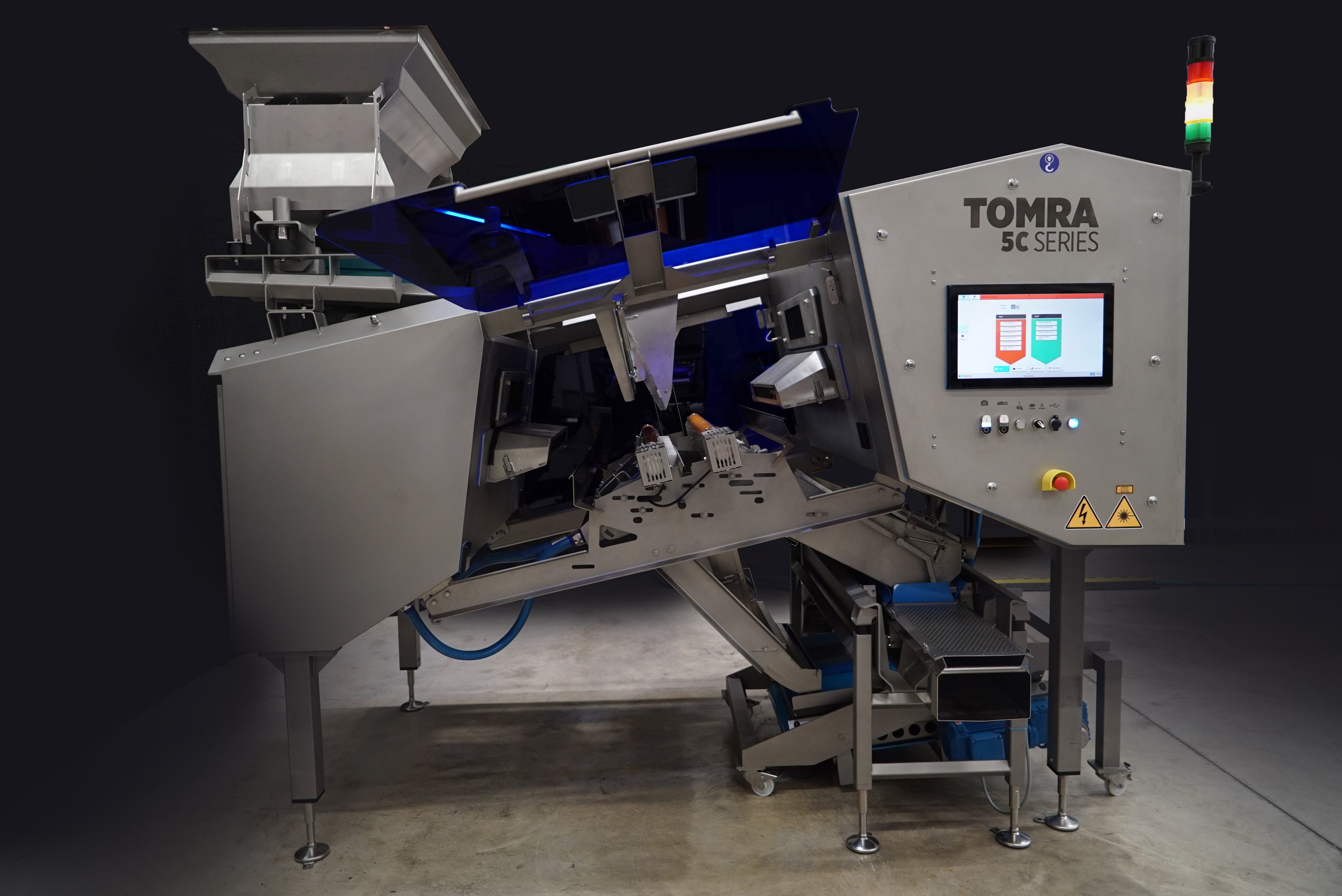 Peter Edmondson, General Manager at Golden Macadamias, commented: "Our partnership with TOMRA has proved strong throughout the years. It has allowed us to pioneer the ideal processing solution for the macadamias market, where we continuously develop new solutions and technologies."

The TOMRA 3C eliminates foreign materials, including stones, shells, and sticks, and, depending on the sorting process, can achieve an incredible efficiency of up to 99.5% purity. It is also well-suited to separating shell from kernel with a low giveaway. Better still, this machine can do all this while sorting more than 20 tons of nuts per hour - a much higher throughput than any of its competitors. The TOMRA 3C can also be used in a second position on the line to remove major discolorations, rotten and moldy kernel, and any remaining shell. 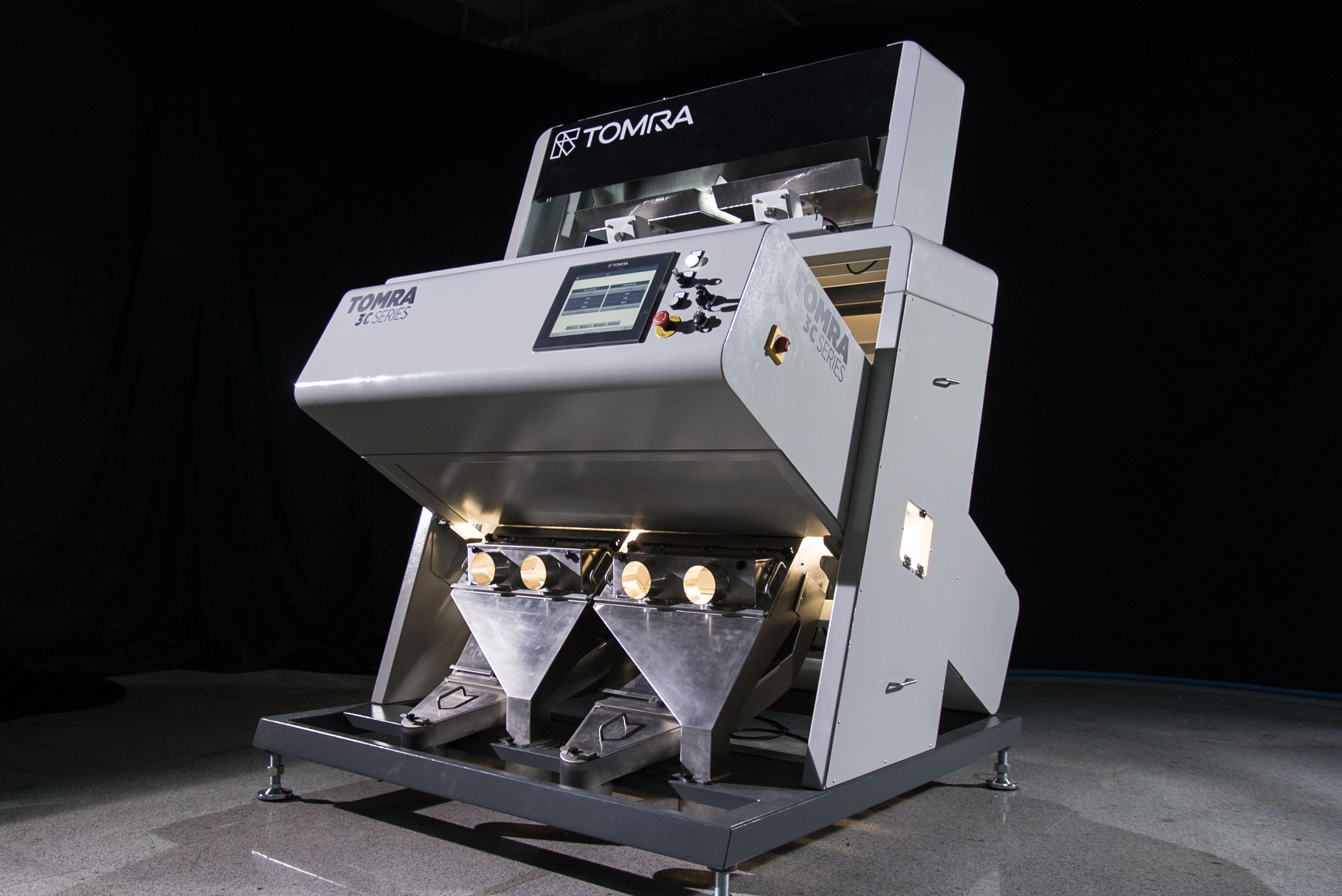 Norman Smith explained: "To examine nuts not only externally but also internally, TOMRA's unique BSI+ technology scans materials with both near-infrared (NIR) and visible spectrum wavelengths. This instantly compares the biometric characteristics of objects to features stored in its database to determine whether they should be accepted or rejected. This technology has an unrivaled ability to detect and reject hard-to-see and nearly invisible defects. In macadamias, such defects include early germination; mold; immature and shriveled nuts; cracked, pale, and dark or black shells; the ‘791 spot' kernel disorder; and insect damage from stink bugs, nut borer moths, and false codling moths."

Future-proofing with rapid return on investment

Peter Edmondson said: "Throughputs and product quality are both very important to us. We currently work two eight-hour shifts five days per week throughout the whole six- to eight-month production season, and our production volumes are continually increasing. TOMRA's machines handle this pressure well, and we have been very impressed by the results delivered by BSI+ technology. After cracking and before manual grading, we have been able to halve the level of unsound nuts from 8% to just 4%. No other technology can match this.”

"As well as identifying the hard-to-find defects, TOMRA's BSI technology has increased factory throughput by 10%. This means the payback period for the technology will be no longer than about two years."

These results convinced Golden Macadamias to purchase the recently-launched successor to the Nimbus, the TOMRA 5C, the latest platform to use BSI+ technology. In addition to being developed specifically for the nut and dried fruit industry, this premium optical sorter will help future-proof Golden Macadamias' production line by connecting to the cloud-based data platform TOMRA Insight. This subscription-based service gathers and securely stores data from sorting machines that can unlock machine performance improvements, transforming sorting from an operational process into a strategic management tool - another way in which Golden Macadamias will simultaneously increase production volumes while also ensuring world-class product quality. 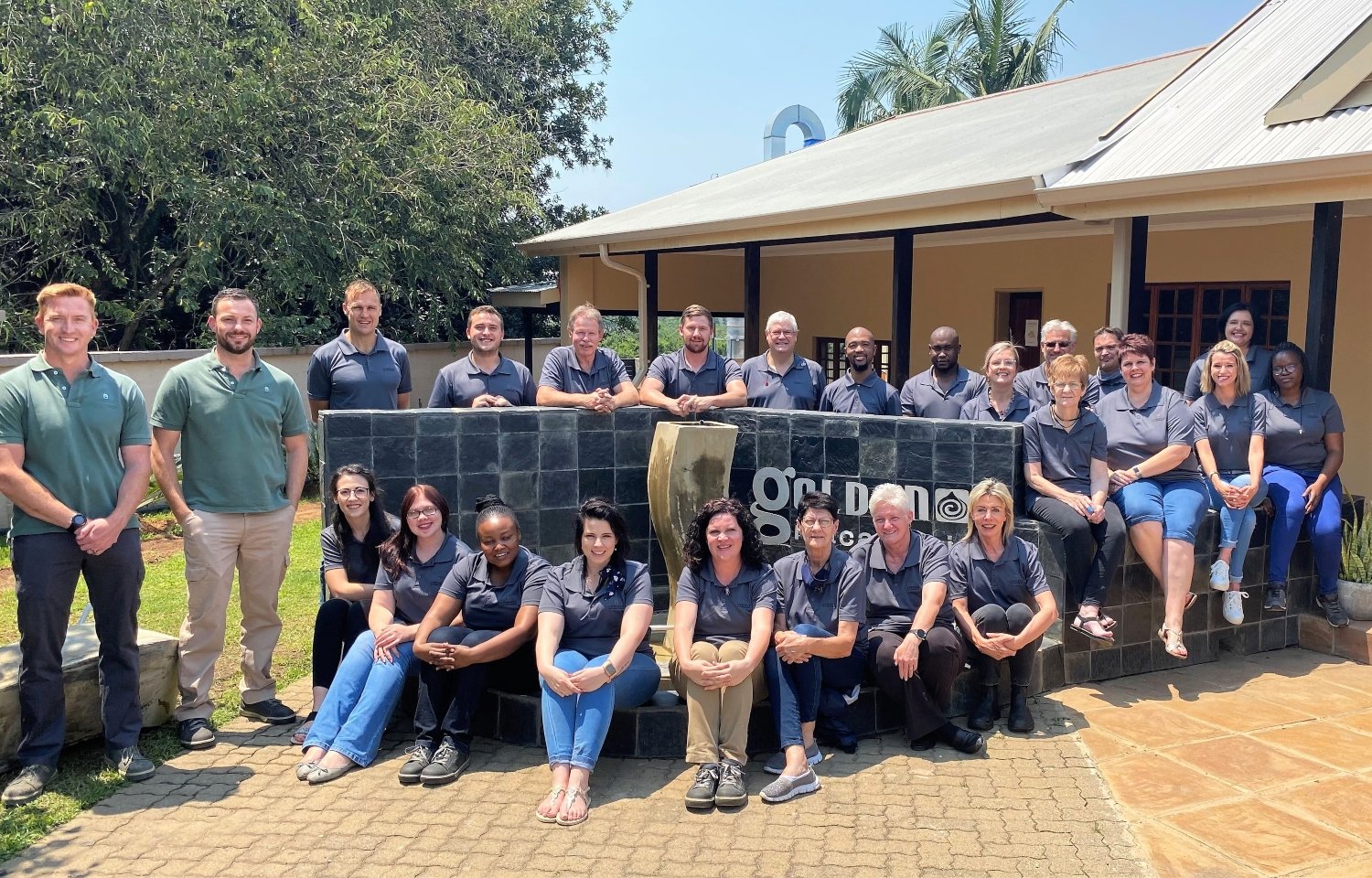