Last June, Oliveira Pinho & Filhos, a family business located in the municipality of Mira (Portugal) dedicated to the trade of bagged potatoes and onions, purchased a Sentinel II optical food sorter from TOMRA. This machine is equipped with the latest pulsed LED technology for sorting food at a higher speed than earlier models. 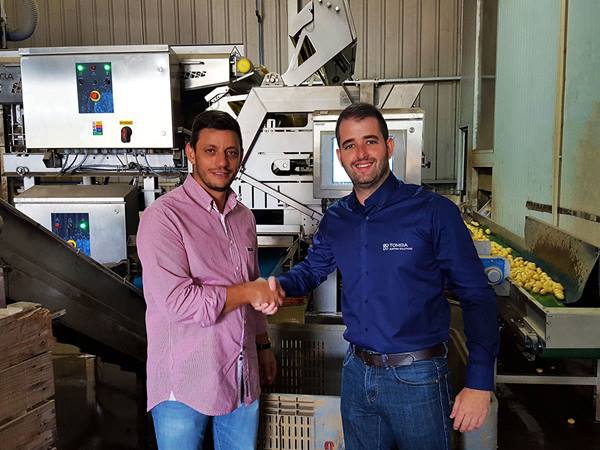 "Some farmers in France spoke very highly of the TOMRA machinery. Then, at the Fruit Attraction fruit and vegetable trade show in Madrid, I was able to meet some people from TOMRA in person. That is where the idea to buy their machine began to take shape," says Sergio Pinho, Manager of Oliveira Pinho & Filhos.

The new Sentinel II installed in the Portuguese factory is used for sorting potatoes, which are provided in bulk by farmers from different countries. After the washing and drying process, the potatoes pass the inspection zone before they are packaged for sale. As Alejandro Palacios Valencia, Sales Director Spain and Portugal for TOMRA Sorting Food, explains: "The ejectors work with high precision and allow the high-speed ejection of foreign material and bad potatoes."

Before integrating the Sentinel II in their production line, Oliveira Pinho & Filhos performed this sorting process manually. They used four people for this, which ultimately meant dedicating more time and resources to an inefficient sorting process.

In the words of Sergio Pinho: "The Sentinel II allowed us to increase the final quality of the goods with less labour. Our customers are more satisfied and the process in our factory has significantly improved." In fact, now one worker deals with the machine while the other three employees have been reassigned to other jobs where they were much more needed.

Alejandro Palacios Valencia says that "with the Sentinel II, we have responded to the customer's specific need to increase the quality of their product. The sorting machine sorts the potatoes on colour, rejecting the green potatoes or those with spots or rot. It also detects foreign material such as sticks and stones and eliminates it from the final product offered for sale by Oliveira, which again enhances quality."

The arrival of the machine to the factory also results in a better division of labour and an increased productivity. "The amount of potatoes that we are capable of sorting has increased thanks to the Sentinel II. Now we can inspect 15 tons/hour of small potatoes and 20 tons/hour of medium-sized potatoes," says the Manager of Oliveira Pinho & Filhos.
As well as its efficiency, the Sentinel II is an appealing sorter because it is so easy to operate. Alejandro Palacios: "The product demonstration with Oliveira Pinho & Filhos at our test centre in Leuven, Belgium, was the fastest in the history of TOMRA. It only lasted 10 minutes. As soon as the customer saw how the machine performed on the first test batch, they were convinced. They particularly valued its ease of use."

Its simple, robust design and low maintenance costs are added advantages that were appreciated by Oliveira Pinho & Filhos. Sergio Pinho confirms that the team received training from TOMRA that allowed them "to easily configure the machine for different potato varieties and colours. In addition, the Sentinel II needs little maintenance and thanks to its relatively small size fits very well in our production line."

"There is a growing trend to implement optical sensor-based technologies in both large and small companies. Our machines undoubtedly allow companies to stand out from their competitors thanks to a significant improvement in the final quality of their product," says Alejandro Palacios Valencia.

"TOMRA has helped us to improve our productivity, we recommend their machines without a doubt," concludes the Manager of Oliveira Pinho & Filhos. 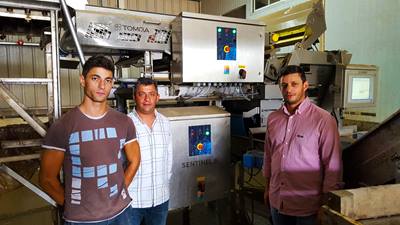